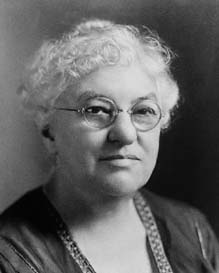 In 1894, Mary McDowell opened the University
of Chicago Settlement House in her apartment
at 4655 Gross (now McDowell) Avenue. In
this Back of the Yards neighborhood, the air
from the surrounding stockyards was permeated
with the stench of rotting meat and open
sewers. Immigrant families lived in crowded,
unsanitary housing. Mary McDowell was a
driving force to remedy much of that.

McDowell began her lifetime of social reform at Hull-House, under the
guidance of pioneering social worker Jane Addams. At the University of
Chicago Settlement House, McDowell organized classes in English,
nutrition and hygiene, opened a kindergarten and provided access to
vocational schools, bathing facilities, concerts, lectures and clubs.

Recognizing the link between quality of life and the physical
environment, McDowell fought to close open garbage pits, drain pools
of stagnant water and install sewers. She toured Europe to study
waste disposal methods, forcing the city to create a Waste
Commission upon her return. Known as “The Garbage Lady,” she was
appointed one of its first members.

In addition to her work at the settlement house, McDowell supported
labor organization, women’s suffrage and temperance. She pressured
the federal government to investigate the conditions in which women
and children worked and to establish the Women’s Bureau of the U.S.
Department of Labor.